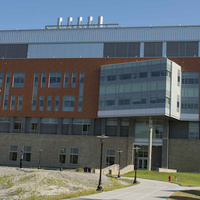 One of the newest buildings on the University’s Kingston Campus  is named in honor of 1962 URI alumnus and supporter Richard Beaupre, the founder and chief executive officer of Lincoln-based ChemArt.

Funded in large part by a $61 million bond issue approved by Rhode Island voters in the 2010 election, the 135,000-square-foot center will serve more than 7,000 chemistry students. About 40 percent of all URI degree programs require at least one chemistry class.

TEDxURI: A Recipe for Hope