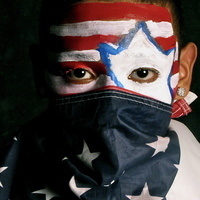 HUMAN CREATIVITY  When students are asked to create about “what matters,” great things happen.  Veteran teacher Deanna Camputaro shares her most poignant projects through the creative work of students from Central Falls.  This exhibit celebrates the multicultural arts program in Central Falls High School under the direction of Deanna Camputaro.  The work includes large mixed media masks, photography and paper works, and dance and drumming performances on topics of immigration, identity, social justice and peace.

HUMAN CREATIVITY showcases creative work inspired by social justice, peace, and identity.  When Deanna Camputaro came to the end of a 40 year career working with young people, with the last 30 years at Central Falls High School, she began the process of clearing out the closets and the media from computers.  As she revisited the work her students had created and performed, she was pleased to see she had walked the walk.  A big proponent of social justice issues and giving students the opportunity to experience the power of their own stories, Deanna created school day and after school projects and programs that stressed not only seeing the value in one’s own identity but also the identity of others.

Human Creativity began as an after school dance program at Central Falls High School 30  years ago.  An art teacher during the school day, Deanna was also certified to teach dance and found three interested students to work with after school.  Thirty years later, over one hundred students strutted the stage in the annual Martin Luther King Jr. Celebration, which has become a tradition at the high school.

This creative work is just one of the areas covered in the exhibit.  In the later part of her career, Deanna partnered with other Art teachers, Drama, English, and Math teachers as they developed the Arts Academy.  Another area covered in this exhibit revolves around the peace initiative through which there were school wide events, visual, 3D, written and mathematical projects developed.

Also showcased in the exhibit are projects exploring immigration, race, identity and the American Flag.  Through each project, students were challenged to see themselves and their connection to their families, their community, their countries, and the world.  As a community of artists students and staff grappled with the issues of the times.