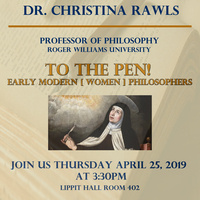 Chris Rawls received her PhD in philosophy from Duquesne University in 2015. She spent several years working on both Early Modern philosophy with an emphasis on Spinoza and the Critical Philosophy of Race with an emphasis on phenomenology and U.S. race relations having studied closely with George Yancy from 2006 to the present. Dr. Rawls currently works in the area of philosophy of education, philosophy of film, and focuses heavily on successful, meaningful teaching. She has been teaching for more than a decade and is now at Roger Williams University. Dr. Rawls was a part of the 6 person team of philosophers who co-founded the permanent archive for the Society for Women in Philosophy (SWIP) at the Pembroke Center for Feminist Theory, Brown University. The archive officially opened in 2016, but has since been reorganized and reopened to the public in 2018.

Dr. Rawls has recently published on the crisis of contingent faculty in the U.S., on Spinoza and Spinoza scholarship, and is a regular contributor to the American Philosophical Association Blog. She has remained interested in aesthetics and metaphysical existentialism, having published photographs, made short documentaries with students, and presented poetry at academic conferences. This summer her co-edited, international anthology Philosophy and Film: Bridging Divides will be published with Routledge Press in their Series on Aesthetics.