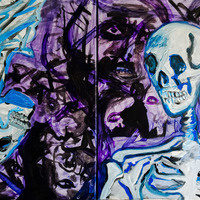 Spirits, Spirituality, the Supernatural and Steampunk: from the sacred to the profane, October 4-29, Monday-Thursday 9am-9pm, Friday 9am-5pm.

An exhibit in all media exploring all forms of spirituality, religious ritual, and the connections between spirituality and steampunk: the retro - science fiction and fantasy stemming from late 19th century gothic and silent films and multimedia performance.