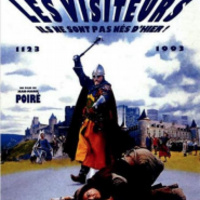 Free French film "Les Visiteurs" (The Visitors). A French fantasy comedy film directed by Jean-Marie Poiré and released in 1993. A 12th-century knight and his servant travel in time to the end of the 20th century and find themselves adrift in modern society. English subtitles available.