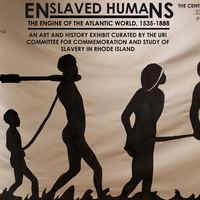 The Center for Reconciliation is proud to present “Enslaved Humans: The Engine of the Atlantic World, 1535-1888,” the third annual gallery exhibition curated by the University of Rhode Island’s Committee for the Commemoration and Study of Slavery in Rhode Island (CCSSRI).

Once obfuscated by discussions of “mercantilism” or a “triangular trade,” recent scholarship of the transatlantic trade in raw material goods has illuminated the reality that the burgeoning economies of the early modern world were made possible by the forced transport of 12 million enslaved Africans, many of whom did not survive the Middle Passage.

For more than 300 years, their stories were at the core of the development of the Atlantic world. Now, theirs are the stories at the core of “Enslaved Humans,” an exhibition that aims to chronicle the deep historical roots of perhaps the most remarkable and tragic shift in human history -- the forced transport of enslaved Africans to further the business models of European interests and power the economic engine of the Atlantic world.

Join us for the exhibit’s opening event at 6 PM on Wednesday, April 3, featuring a special performance and remarks from curators and staff of the URI CCSSRI and the Center for Reconciliation.

The Center for Reconciliation is a nonprofit organization based in Providence, R.I., and dedicated to the work of racial justice and racial reconciliation.

Free and open to the public