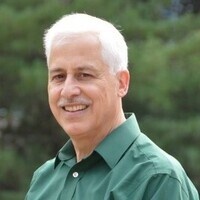 Subspace estimation is an implicit or explicit part of signal processing tasks such as adaptive beamforming or direction-of-arrival estimation using an array of sensors. This talk will begin with background information on sensor-array signal processing and the importance of estimating the signal subspace. This subspace is usually estimated by calculating the eigenvector decomposition (EVD) of a sample covariance matrix.  However, the EVD estimate of the signal subspace does not achieve the statistical bound on subspace accuracy and more accurate estimates are possible.  In this talk, a new, closed-form, optimal subspace estimation (OSE) algorithm that achieves the accuracy bound will be presented and demonstrated with several examples showing improved performance when using the OSE subspace versus the EVD subspace.  An adaptive beamforming example is given in which EVD requires 100 times more sensor-array data than OSE to achieve a given level of performance. An example of direction-of-arrival (DOA) estimation is given in which the DOAs obtained from EVD are biased and statistically inefficient while those obtained from OSE are unbiased and statistically efficient.

Richard J. Vaccaro received a Ph.D. in electrical engineering from Princeton University in 1983 and since then has been a faculty member at the University of Rhode Island in the Department of Electrical, Computer, & Biomedical Engineering.  He was Department Chair from 1999-2005.  He is a past chair of the Underwater Acoustic Signal Processing Technical Committee of the IEEE Signal Processing Society. During the summers of 2015-2017 he was a Senior Fellow in the ONR Summer Faculty Research Program at the Naval Undersea Warfare Center, Newport, RI.  His research interests include sensor-array signal processing, modeling and estimation for rate gyros, and control system design.

~ Seminars are open to the public. We hope you can join us! ~