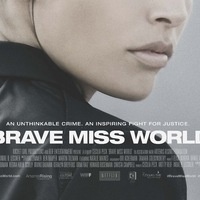 Israeli beauty queen Linor Abargil was abducted and raped in Milan, Italy two months before being crowned Miss World in 1998. Ten years later, she’s ready to talk about it – and to encourage others to speak out. Now a globe-trotting victims’ advocate, Linor encourages others to stand against sexual violence by putting an end to their silence.

Linor returns to Italy for the first time since her rape, in an attempt to face her fears and to find the prosecutor who collaborated with Israeli authorities to arrest the serial rapist. While there, in an extraordinary twist of fate, she meets up with another woman raped by the same man in eerily identical circumstances. For victims of sexual assault, the journey toward wholeness never ends; still, Linor Abargil, the BRAVE MISS WORLD, continues her unflinching efforts to keep the nightmares at bay.

The film is supported by grants from Women In Film, Foundation for Jewish Culture, Artemis Rising Foundation and The Fledgling Fund.