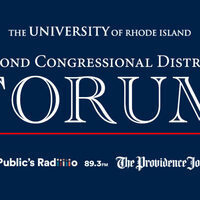 As the November midterm elections approach, control of the United States House of Representatives could come down to just a handful of races.

On Monday, October 17, The Public’s Radio, The Providence Journal and the University of Rhode Island will hold a candidate forum for Rhode Island’s second congressional district seat being vacated by Congressman James Langevin. The race, which promises to be hotly contested, was moved from “Leans D” to “Toss Up” by the Cook Political Report in late June.

Reservations are required as space is limited. Please RSVP by October 10. We invite all members of the community to submit a question to the candidates through the RSVP form.

For those unable to attend in person, the event will be livestreamed by all sponsors and broadcast live by The Public’s Radio.

Please note: No signage or banners will be allowed in Edwards Hall.

For more information or for questions, please contact Karen Sechio in the Office of University Events.