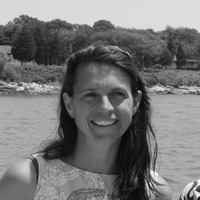 Abstract: Full-ocean-depth observations of subinertial horizontal velocity, temperature and salinity obtained from subsurface moorings at 68.5° W over the period October 2010 - May 2014 are analyzed in conjunction with altimeter-based sea surface height data to construct estimates of the time-averaged Gulf Stream velocity structure and transport. Construction of the stream-coordinate mean section follows the methods of Hall and Bryden [1985] and Johns et al. [1995] where data from a single mooring (or an array) are first binned relative to distance from the Gulf Stream axis and then averaged.  The moored results are compared with an ensemble of full-depth lowered acoustic Doppler current profiler (LADCP) data collected along the moored array and repeated shipboard ADCP (SADCP) upper-ocean velocity sections occupied upstream at 70.3° W.  A time-averaged, full-depth Gulf Stream volume transport estimate of 93 ± 3 Sv is obtained from the mooring data at 68.5˚W (excluding times of large Stream axis curvature); the corresponding transport based on the LADCP observations is 77 ± 5 Sv (the difference coming principally from flow below 1000-m depth).  Relative to the mean field at 70.3° W, the velocity core of the time-averaged Stream at 68.5° W appears broader with weaker maximum speed and slightly smaller volume transport above 600 m: 55 ± 2 Sv at 68.5° W versus 61 ± 2 Sv at 70.3° W.  Weaker Gulf Stream flow at 68.5° than 70.3° W is also inferred from a stream coordinate analysis of satellite altimeter data.  Possible reasons for these changes with downstream distance are discussed and comparisons to previous analyses of Gulf Stream structure and transport are made.