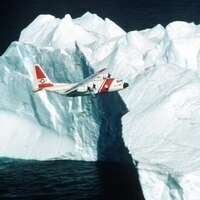 Join us for this week's Physical Oceanography Seminar featuring both Donald Rudnickas, a recent GSO Alumni, and Michael Hicks (US Coast Guard). They work with the International Ice Patrol and will be talking about A Century of Iceberg Observations in the North Atlantic.

The International Maritime Organization (IMO) International Convention for the Safety of Life at Sea (SOLAS) formally established the International Ice Patrol (IIP) in 1914 in response to the loss of over 1,500 lives when RMS TITANIC struck an iceberg and sank approximately 1,000 nautical miles east of Providence, RI in April, 1912.  To fulfill its mission, IIP monitors the iceberg danger on the Grand Banks of Newfoundland and provides the iceberg limit to the maritime community from February to August of each year.  Icebergs that calve from glaciers on the west coast of Greenland can take 1-3 years to reach the Grand Banks and typically threaten the transatlantic shipping lanes from February through July each year, during which time IIP actively patrols the area.  This region of the world is the only location where icebergs and major trans-oceanic shipping lanes intersect.  IIP considers 48°N as the latitude where southward drifting icebergs pose a significant hazard to transatlantic shipping.  As such, IIP carefully tracks the number of icebergs sighted or predicted south of this latitude and maintains a dataset back to 1900.  While the evolution of observation platforms and sensors has improved IIP’s ability to detect icebergs throughout this period, these data demonstrate remarkable inter-annual variability that are attributed to environmental factors such as the extent and concentration of sea ice along the Canadian east coast, the North Atlantic Oscillation, Labrador Sea surface temperature, and Greenland iceberg calving.  This dataset also shows marked increase in variance beginning in the early 1970s.  At its southernmost limits (below 45°N), icebergs can cover an area greater than 300,000 square nautical miles, more acutely impacting the safety and mobility of trans-oceanic vessels as well as maritime operations on the Grand Banks. Anecdotal evidence points toward an overall decline in the number of icebergs passing south of 45°N but the long-term iceberg record does not support this.  Instead, we see two major events since 1960 (one in the early 1970s and one in the early 1990s) that help to explain the observed increase in variance within the 48°N dataset and resulted in more than triple the average number of icebergs passing south of 45°N – a significant risk to the maritime community.  Ongoing research at IIP is examining these events, following the “lifecycle” of an iceberg and analyzing the environmental factors that played a role in such a large flux of icebergs into the shipping lanes.