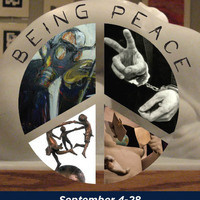 with a Gallery Night Reception on September 20th 5-9 pm.

In addition, there is a special series of Panels, Seeking Shelter: A Story of Place, Faith and Resistance which tell the story of non-violent resistance in the Vietnam War era through the lives of Father Daniel Berrigan and theologian and civil rights lawyer William Stringfellow who belonged to an old American tradition – faith-based activism.  During the tumultuous 1960s and long afterward, the two friends, both hard-working, prolific authors, were also activist opponents of the war in Vietnam and campaigners for civil rights, social justice, nuclear disarmament, and the environment. Seeking Shelter: A Story of Place, Faith and Resistance, the multi-media exhibition that tells this intriguing, moving, and timely story, which made its debut on Block Islandwith an accompanying film, Seeking Shelter, directed by Sue Hagedorn, exploring these themes through the recollections of people who knew the story’s central figures well and have deep insight into Block Island as a place and as a community.

As part of this series with the URI Center for Nonviolence and Peace Studies, we will be presenting a lecture:

Father John Dear is an internationally known voice for peace and nonviolence. He is a popular speaker, peacemaker, organizer, lecturer, retreat leader, who has organized and participated in nonviolent campaigns for over three decades and has written extensively about the work of Daniel Berrigan.

The Cognitive Dissidents include URI Professors Bueno de Mesquita, Reyes and Wood who have played at the university and beyond including the appearance of Pete Seeger as a guest performer on the campus.

Center for Nonviolence and Peace Studies